We turn to lizard, cats, cows to feed on human flesh, 3 children confess 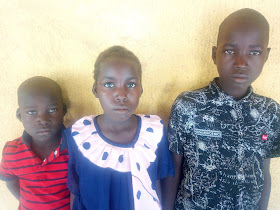 There was palpable tension and anxiety at Magistrate Court IV sitting in Yola, last week as three suspected child witches regaled the court on how they turn to lizards, cats and cows, feed on human flesh and afflict their victims with illnesses.

The court was presided by Magistrate Adamu Abdulrazak.

During the court sitting, the three minors Obama Anthony, Bitrus Anthony and Grace Anthony all siblings aged between seven and 12 years confessed to afflicting a friend of their father, Umar Song, with strange disease.

The trio who confessed being neck deep in sorcery and other psychic activities told the bewildered magistrate that they turn to cows, lizards and cats whenever they want to unleash havoc on their targets adding that they feed on human flesh every three days.

After listening to their confessions, Magistrate Adamu Abdulrazak, directed the children and the woman who initiated them into witchcraft simply identified as Handama to restore the man’s health with dispatch.

The three self-confessed child witches and the woman were brought to court by Garkuwan Sarkin Mayun Adamawa for afflicting Umar.

In their confessional statements, the children said they initially used demonic powers to tie their father’s friend with ropes and iron as directed by the woman, but added they have since untied the victim and exorcised the evil things they implanted in him.

One of the kids, Obama Anthony, who is 12 years old, confessed that he was initiated into witchcraft by Handama, saying that the woman has six children and all of them are witches.

Obama also accused the woman of initiating him in the night while they were living together in the same compound. He said they normally go out for a meeting after every three days at a location called Dabala.

He told said he turns into a lizard before going out for meetings and eats roasted human flesh during the meeting, saying that he is willing to be delivered from the witchcraft.

On his part, Bitrus Anthony, who is seven years old, also accused Handama of initiating him in the devilish act, saying that he has never killed anybody, but he has been participating in their meetings and also eats human flesh.

Bitrus further disclosed that they have so far bewitched seven people noting that some of them are alive, while some of them are dead. He said that he turns into a white cat before attacking his victims.

Baring her mind, Grace Anthony who is nine years old informed said she has been a witch for three years, narrating that it was her brother, Obama who initiated her, and that she has so far bewitched eight people.

Grace further confessed that she attends meetings after every one day at Dabala, and turns into a white cow before going out, explaining that Handama has put headache, malaria fever and something into their victim.