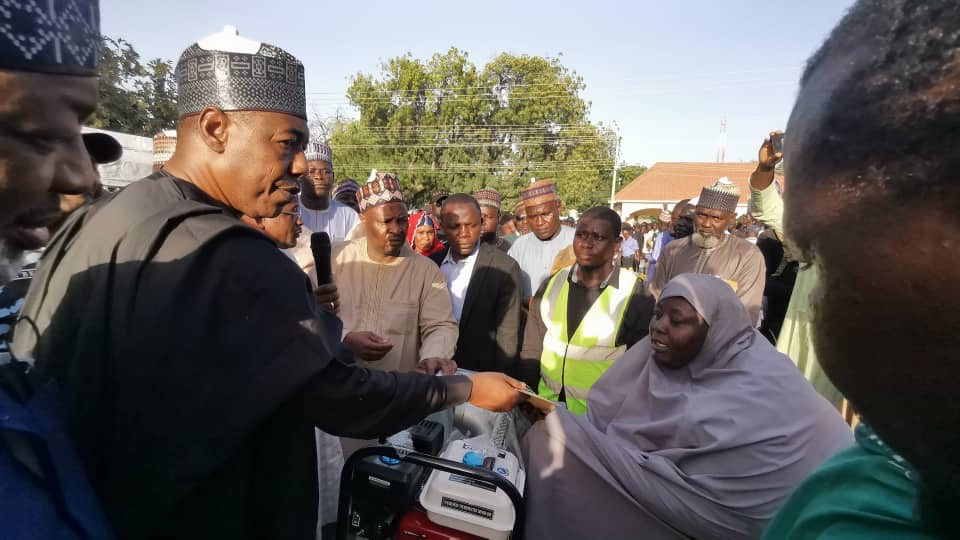 Borno Governor, Professor Babagana Umara Zulum was in Damasak, headquarters of Mobbar local government area in northern Borno and launched the distribution of variety of farm inputs to 1,200 irrigation farmers for food production this dry season, Isa Gusau, his spokesman disclosed in a statement.

Zulum, who traveled with the senator representing northern Borno, also an indigene of Damasak, Abubakar Kyari, distributed water pumps as key components of irrigation, fertilizer, seeds, chemicals and five thousand naira cash to each of the 1,200 farmers, all of whom will be cultivating rice and onions among other food crops.

The event was facilitated by the ministry of agriculture, under its commissioner, Engr Bukar Talba who spoke at the launch.

Damasak community members, led by Senator Kyari, thanked Zulum for his u quantifiable support, expressing their determination to increase to food production in line with the governor’s vision in agriculture.

Zulum has always held the view that unless resettled communities engage in agricultural activities, there could be problems resulting unsustainable dependence on food aid from donors.


On the second day of his ongoing stay in Damasak, in the shores of the Lake Chad, Borno Governor, Prof Babagana Umara Zulum on Sunday, supervised the distribution of food combination to 10,000 internally displaced families in need of support.

Each of the 10,000 families received 25kg of rice25kg of beans, 25kg of maize and 5 litres of cooking oil as part of interventions before they can generate livelihoods for themselves in Damasak.
Damasak, headquarters of Mobbar local government area in northern Borno, is a former stronghold of Boko Haram insurgents before it was liberated with citizens now resettled by Zulum.

Zulum traveled to Damasak on Saturday, the day he launched the distribution of water pumps, fertilizer, seeds, chemicals and five thousand naira cash to each of 1,200 irrigation farmers embarking on food cultivation this dry season.
The governor traveled with Senator Abubakar Kyari, the senator representing northern Borno, who is also an indigene of Damasak. Also in the trip is state caretaker chairman of the APC, Ali Bukar Dalori, commissioner for agric, Engr Bukar Talba and some stakeholders with affiliation to Mobbar LGA.

Damasak community members, led by Senator Kyari, on Saturday, thanked Zulum for his unquantifiable support.
Zulum hopes that when farmers in Damasak, like others across the state, are able to cultivate food, dependence on food aid from donor partners will be largely reduced.