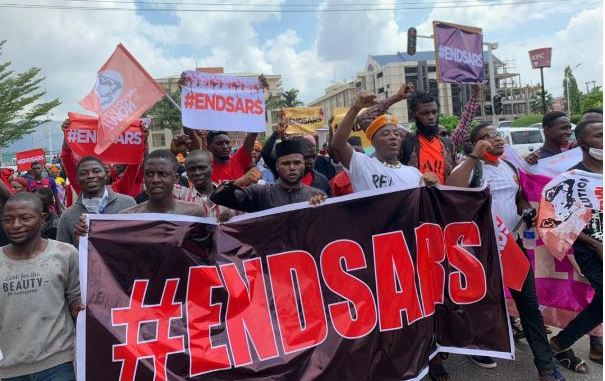 The Apex bank in Nigeria, Central Bank of Nigeria secured a court order freezing the accounts of 19 individuals and a company linked to the protests till 2021.

The request, granted by Justice Ahmed Mohammed of the Federal High Court in Abuja, was filed by the CBN on October 20.

The freezing of these #ENDSARS Promoters accounts’ came just before the report of the 7 Nigerians who were convicted by the Abu Dhabi Federal Court of Appeal in the United Arab Emirates (UAE) over alleged funding of Boko haram, Two of the convicts, Surajo Abubakar Muhammad and Saleh Yusuf Adamu were sentenced to life imprisonment while the remaining four, Ibrahim Ali Alhassan, AbdurRahman Ado Musa, Bashir Ali Yusuf and Muhammad Ibrahim Isa were handed ten-year imprisonment respectively.

The court judgment also showed that between 2015 and 2016, the convicts were involved in different cash transfers allegedly in favour of Boko Haram to the tune of USD782, 000.00 even as those close to them said the transactions were for legitimate purposes.

What is the role of the Apex bank in Nigeria if not for the monitoring of cash transactions, processing legitimate payments and flagging suspicious ones through the commercial banks, within 2015 and 2016, these 7 Nigerians named above funded Boko Haram through their Bureau de Change business to the tune of 297 Million Naira under the nostrils of the CBN and the CBN In it’s capacity could not detect this terrorist act in order to flag it and make the funds inaccessible. It is pertinent to note that funding of any terrorist group in Nigeria is punishable under the Nigeria Terrorism Prevention Act, 2011 to a maximum term of 20 years, yet the CBN through the intelligence Agency found it difficult to perform one of its crucial responsibilities  but went ahead to secure a court order requesting freezing account of #ENDSARS protesters who were just exercising their civic rights in series of peaceful protests, calling for the disbandment of the Special Anti Robbery Squad (SARS), a notorious unit of the Nigerian Police with a long record of abuses.

The CBN accused the peaceful #ENDSARS protesters of funding terrorism whereas the CBN has done nothing to identify and stop the real funders of the terrorist group.

Elizabeth Donnelly of the African Program with the London Policy Institute Chatham House states it best, “Before authorities can cut off Boko Haram funding, they have to find it. Finding it would go a long way toward crippling the group.’’ Since this is about Funds for a group in Nigeria it automatically has to concern the Apex bank in Nigeria. To what extent has the CBN been able to provide help to the Intelligence Agency or the military in order to locate how the Boko Haram Sect receives funds ?

The U.S. Treasury Department has publicly stated that they have evidence that Boko Haram has received funding from both Al-Qaeda and Al-Qaeda in the Islamic Magreb (AQIM). In 2012, the Nigerian media reported that the president received intelligence that Boko Haram had received a $40 million payment from AQIM (which also operates in West Africa); this was reported to be the first of many payments that were to take place between the two groups.

No matter how big or small violent extremist organizations (VEOs) are, without the ability to finance their operations and recruit new members, their existence would be short-lived. Colin Clarke, a political scientist at the RAND Corporation, highlights this point by saying that the lifeblood of any VEO is its ability to generate funds. For the Boko Haram terrorists to still be in operation, it is an indication that the terrorists still receive large funding.

The CBN In its efforts to reduce Boko Haram’s finances has failed woefully.  It has been unable to identify the real funders of terrorism in Nigeria, it is high time the Apex bank in Nigeria sat up to its duties and responsibilities and stop chastising peaceful #ENDSARS supporters who were fighting for a good cause.