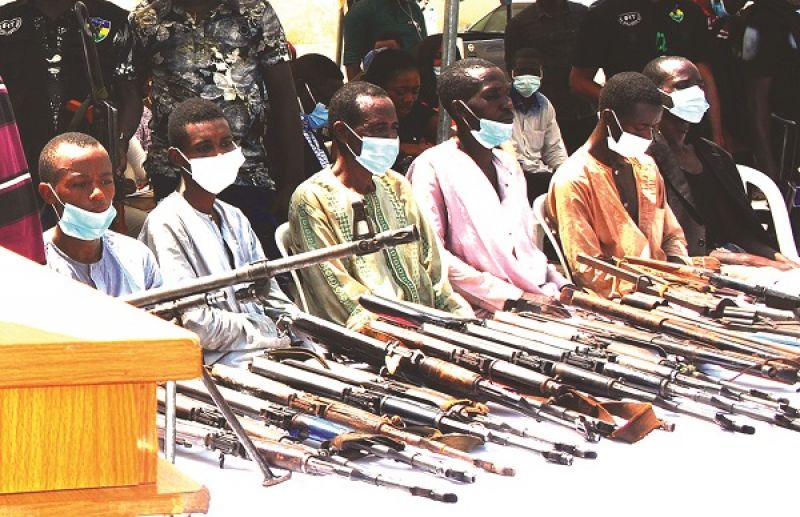 The police in Nigeria, have announced yet a fresh haul-in  of criminal gangs, among them 48 suspects involved kidnapping, culpable homicide, armed robbery and car theft, as the nation continues to grapple with high-level insecurity.

The feat was the handiwork of the Intelligence Response Team (IRT) of the police force over, whom the police authorities praised profusely, while parading the suspects at the IRT Office in Guzape, on Monday.

Conveying the sentiments of Louis Edet House, the headquarters of the Nigerian Police Force (NPF ) in Abuja, spokesman Frank, who was with the IRT Commander Tunji Disu advised kidnap victims against struggling with kidnappers to ensure safety before and during rescue by the police.

Mba, Force Public Relations Officer (FPPRO) and a Commissioner of Police (CP), said all those arrested and paraded suspects were criminally minded adults who had empirically been proven to have been linked with kidnap for ransom, culpable homicide, armed robbery and car theft.

Giving the details, Mba said, that Abubakar Harilu, 36, one of the suspects, was arrested by the task team of the IRT for kidnapping and killing one Binta Mohammed, 48, a cousin of his who gave him loans to buy tricycles, by luring her to some of his gang of kidnappers and instructing them to extort money from and kill her having failed to repay the loan she gave him as agreed.

“But fortunately for her, she escaped from the kidnappers in their hideout in Jigawa on the first day of her captivity and reported the matter to the police which led to the trailing and arrest of the suspect,” Mba said.

The IRT also paraded two other kidnappers – Salisu  Abdullahi, 28, and Babangida Usman, 21, who were said to belong to a “very wicked kidnap for ransom gang” that kidnapped a professor at ATBU Bauchi and a filling station owner in Kaduna State.

The same criminal gang members were also paraded for the abduction of a Catholic Priest Rev.Fr Tony Bawa who was reportedly kidnapped at Kuchin Makaranta in the Northwest, but later released, while one of the kidnap victims,  one Chinedu was reportedly murdered by the gang while trying to wrestle with the leader.

They were arrested by the IRT in Jos, Plateau State for robbing a man of his Toyota Corolla car and selling it to procure AK47 and other outlawed arms.

The gang members were accused of dispossesing innocent travellers for over seven years and they have all been imprisoned at one time or another before they were rearrested for robbery by IRT.

Some exhibits said to have been recovered from them include 1 GPMG, 3 AK47 rifles, 10 laptop computers and some other arms and live ammunition.

Mba, who noted that most victims of kidnap for ransom are persons related to their captors, assured that the police and other security agencies will not relent on closing in on criminally-minded persons.

He suspects will be charged to court after the completion of investigations by relevant police units.