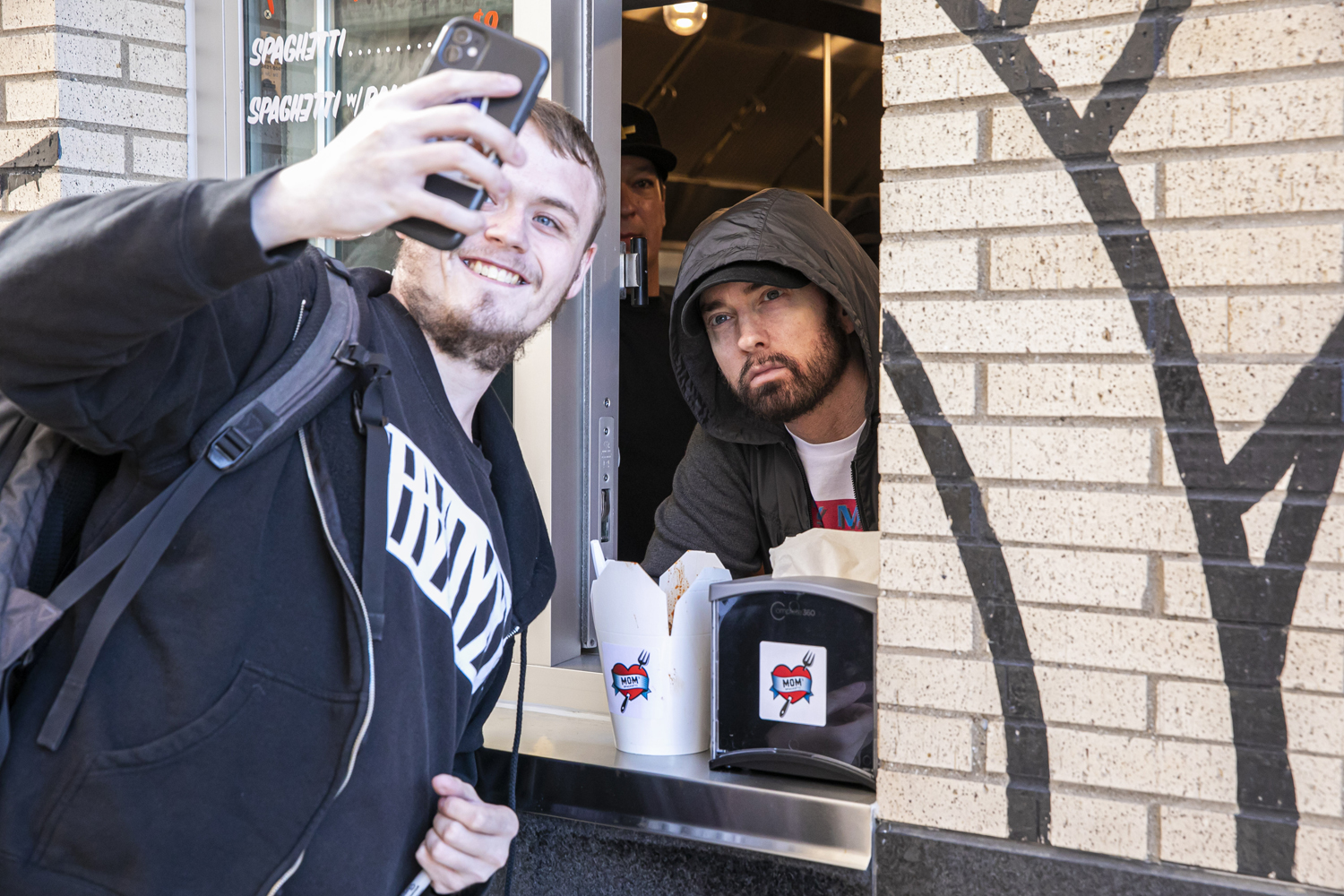 Mom’s Spaghetti, based on the popular lyric from Eminem’s 2002 hit “Lose Yourself,” features a simple menu of no-fuss Italian fare like spaghetti, meatballs, and a s’ghetti sandwich

Eminem was serving hungry customers in Detroit on Wednesday night.

The 48-year-old rapper made a rare public appearance, stopping by the grand opening of his new restaurant, Mom’s Spaghetti — which takes it’s name from an infamous lyric in one of Slim Shady’s biggest hits, the 2002 Oscar and Grammy-winning tune, “Lose Yourself.”

“His palms are sweaty, knees weak, arms are heavy,” Em raps early on in the song, which he penned for the soundtrack to his film, 8 Mile. “There’s vomit on his sweater already, mom’s spaghetti.”

Em (né Marshall Mathers) first transformed the lyric into a food concept back in 2017, opening up Mom’s Spaghetti as a pop-up shop at popular Detroit music venue the Shelter while promoting the release of his album, Revival. Last April, he sent containers of prepared spaghetti to frontline workers at Henry Ford and DMC hospitals, as they helped those in need amid the then-emerging coronavirus crisis.

Now, Mom’s Spaghetti has a more permanent spot, taking up a bodega-sized portion of the ally next to Union Assembly — the two-story 14,800-square-foot restaurant in District Detroit across from Comerica Park.

Union Joints, owner of Union Assembly, are partners with Eminem in the concept

At Wednesday’s opening, Eminem posted at the spot’s walk-up window, where customers can order from the restaurant’s simple menu of Mom’s Spaghetti ($9), Mom’s Spaghetti with Meatballs ($12), and a variety of “pop” or water ($3).

A shot was snapped of him, too, at The Trailer — a store for “stans” of Eminem featuring merch and memorabilia. It’s located just upstairs from the bodega-sized restaurant.

Share
Related Topics:"Lose Yourself."Eminemfrom an infamous lyric in one of Slim Shady's biggest hitshe sent containers of prepared spaghetti to frontline workers at Henry Ford and DMC hospitalsMom's Spaghettithe 2002 Oscar and Grammy-winning tune
Up Next