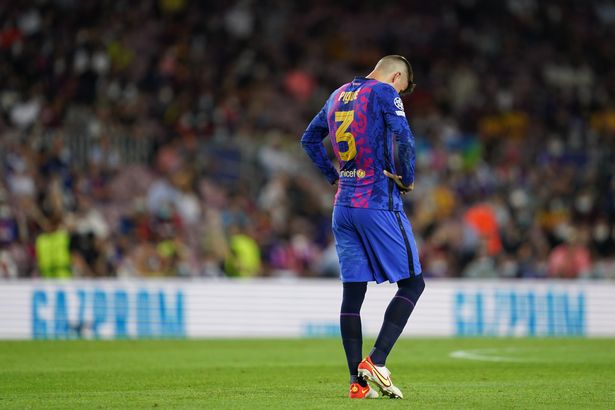 A section of the 40,000-crowd at the Camp Nou booed the midfielder for his below-par performance during the match, which Bayern comfortably won by three goals.

Robert Lewandowski netted twice for the visitors after Thomas Muller had given them the lead when his long-range effort was deflected in.

Such was the dominance of Julian Nagelsmann’s side, Barca did not muster a shot on target throughout the game and supporters voiced their displeasure by jeering Sergi Roberto – who has spent the entirety of his career at the club – when he was subbed off.

Pique used his post-match interview on Spanish TV to condemn those who whistled at his teammate and claimed that it was a counterproductive move.

The central defender explained: “The whistles towards Sergi Roberto are hurtful

“I would like to remind people that he is a midfielder, not a winger. He has made a sacrifice to adapt to that position on the pitch.

“People are free to express themselves but I do not like the whistles, they do not help.

“I know the person, he is a spectacular human being and he wants more than anything for this club to be successful.

Pique tried to find the bright spots for Barca on a difficult night when the reality of the gap in quality between them and Bayern was evident.

He added: “I think the result is lopsided and playing at home it is a bad score. But if you look at the game, in the first half we have competed, and they have taken the lead with a rebounded goal. The 0-2 hurts us.

“18-year-olds have entered, the team has shown their face, they have competed. It is what it is, we are what we are now and I hope that players will be added.

“It is a complicated season. They have been superior, but we have the bases to continue to compete. We will see at the end of the season, but we have people like Ansu (Fati) and (Sergio Aguero) Kun who can improve us.”

Pique – who has won three Champions League titles during his time with the club – admitted that they were not among the favourites for this year’s competition.

He continued: “Right now we will not be among the favourites for the Champions League, but nothing happens because we are not.

“Sometimes we have been among the favourites but we have not succeeded. Last year who said would be the favourite?

“Football changes a lot, they are moods. They are. They have been together for many years, with experience and we are what we are…four or five 18-year-olds have come out.

“This is our reality. I don’t want to excuse myself. We are Barça. We will see at the end of the season if, we will end up competing.”

Share
Related Topics:000-crowd at the Camp Nou booed18-year-olds have enteredA section of the 40Barcelona captain Gerard Piquebooed Sergi Roberto during Tuesdaymidfielder for his below-par performancePique - who has won three Champions League titles during his time with the club - admittedThe 0-2 hurts us.the team has shown their face
Up Next