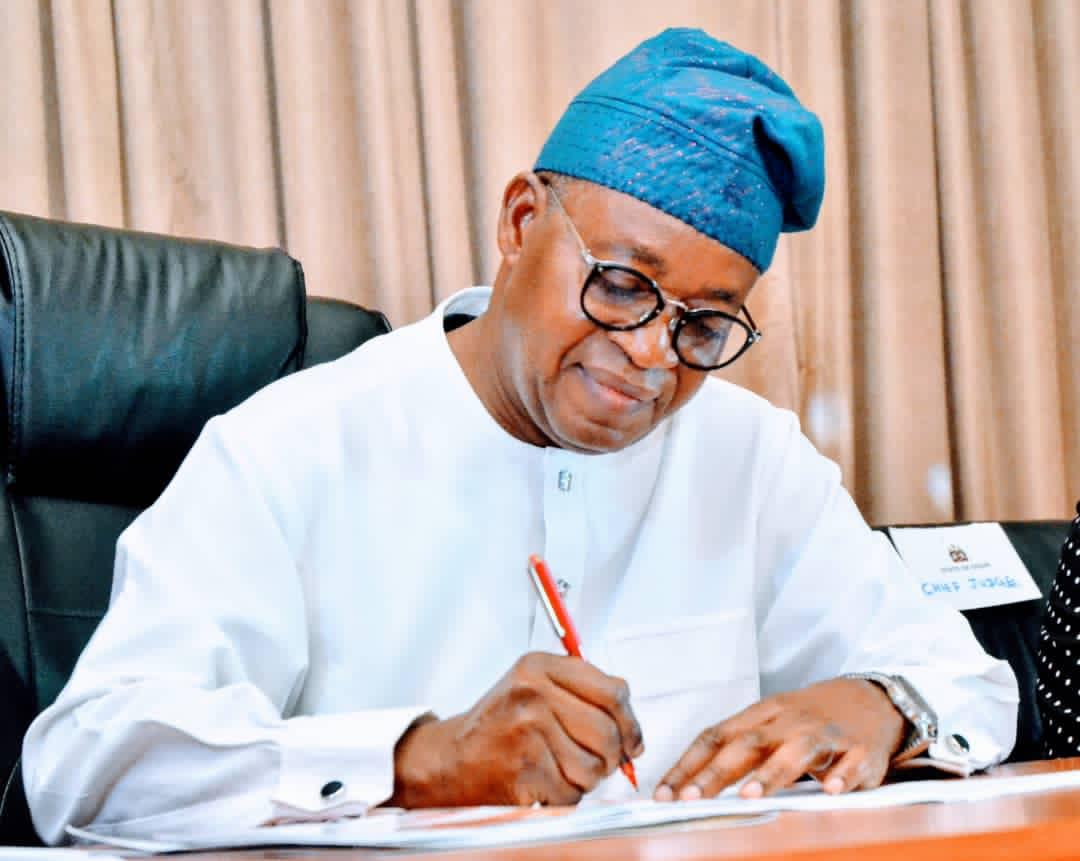 The Governor of the State of Osun, Adegboyega Oyetola, on Friday inaugurated Ife Grand Resort and Industrial Park.
Governor Oyetola said the initiative is in tandem with the Administration’s Development Agenda which is focused on revitalising the economy and stimulating the local socioeconomic indices for maximum growth.
This is even as the Governor lauded the Ooni of Ife, Oba Adeyeye Enitan Ogunwusi, for his exemplary leadership quality, love and passion for socioeconomic development of the State in general and Ile-Ife in particular.
The monumental Grand Resort and Industrial Park is owned by the revered monarch, Ooni Ogunwusi.
The edifice is spread on over 1,000 acres of land. The resort consists of facilities for lodging/accommodation, a 3, 000 seating capacity Meeting Incentives Conference and Event (MICE) Centre branded ‘Ojaja Arena’ and multiple industrial parks.
Addressing the people during the official opening of the edifice in Ile-Ife, Governor Oyetola said the initiative would go a long way to complement the Administration’s efforts to leverage on the comparative advantage in tourism and culture, mining and agriculture.
Oyetola who described the initiative as a round peg in a round hole, noted that the unveiling of the brand-new city of hubs, which has been conceived to generate employment for the youths would further impact positively the lives of the people and as well help to showcase the rich cultural heritage and value of Ile-Ife.
While commending the foremost traditional ruler for his noble vision for human capital development, particularly his inimitable passion for the youth, Oyetola said the execution of the park has further justified the monarch’s love for development.
“For anyone familiar with Kabiyesi’s trajectory and passion for youth and socioeconomic development, this indeed would not come as a surprise.
“In 2019, he organised a Summit on Addressing Growing Youth Unemployment in Nigeria: The Significance of Made in Nigeria and Buy Nigeria, to rally Nigerians to patronise made-in-Nigeria goods.
“Ooni Ogunwusi donated motorised Local Fumigators to States across Nigeria during the Covid-19 pandemic. He also partnered with Afe Babalola on clinical research to develop drugs and vaccines to combat the Coronavirus pandemic.
“As a Government, we are immensely proud of your achievements since your assumption of the throne of your forefathers. This sprawling edifice is another worthy feather in this regard.
“I must note that this resort, no doubt, is in tandem with our Administration’s Development Agenda,  which is focused on revitalising our economy and stimulating the local economy for maximum growth. This we are doing by leveraging, in the first instance, our comparative advantage in tourism and culture, mining and agriculture.
“Our infrastructure development plan is also carefully targeted at ensuring that we open up the latent economic potential of our towns by ensuring that our people are supported with the requisite social amenities for a decent living.
“Therefore, we are immensely grateful to Kabiyesi for joining forces with us to strengthen our economy. I urge other royal fathers to take a cue from Kabiyesi by using their influence and instrument of office to support the development of our State.
“Let me employ this medium to stress that initiatives such as Ooni is creating and attracting to Ile-Ife will only thrive and be sustainable in an atmosphere of peace. I therefore appeal to our youths and people to continue to allow peace to reign so that they can enjoy the dividends of the enterprise,” he added.
On his part, the Ooni lauded the governor for supporting private initiatives and for providing conducive atmosphere for private investments to strive.
The occasion was attended by traditional rulers, cultural icons, sons and daughters of Ile-Ife among others.

Buhari’s approval of N6.25B will kickstart ranching in Katsina 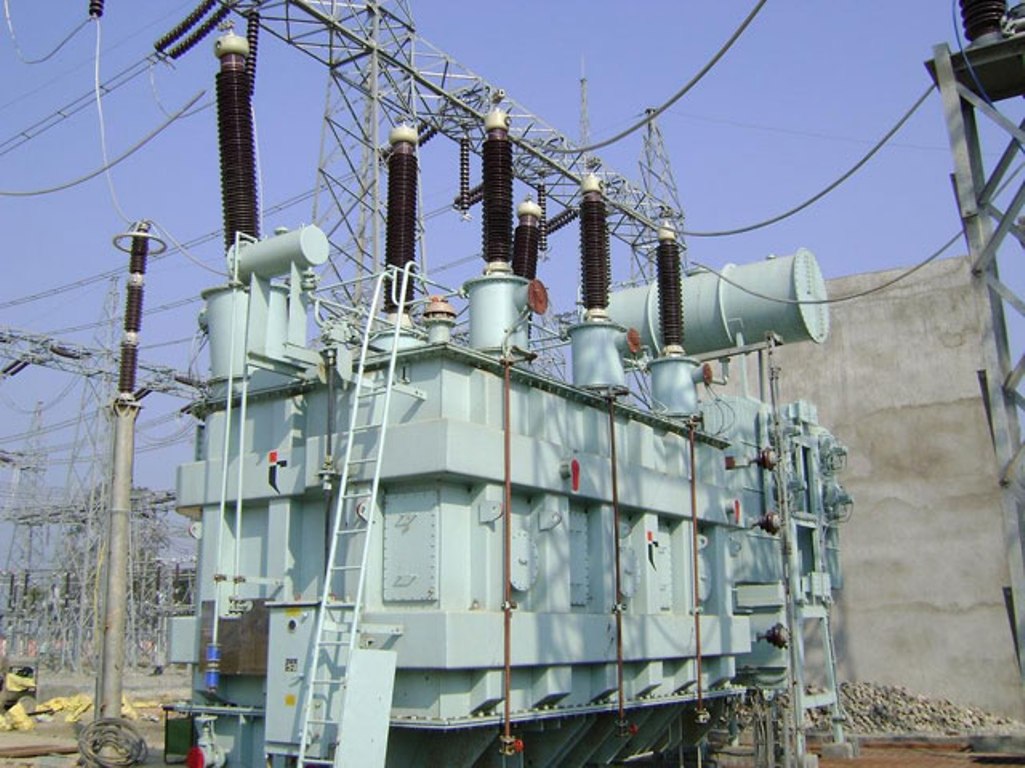 Nigeria is currently experiencing a blackout, as a collapse of the electricity grid has been reported.

According to him, the incident led to an interruption of power supply in Abuja and its surroundings.

Fadipe, meanwhile assured Nigerians that power supply will be restored to the states within its franchise as soon as the firm receives significant improvement in energy allocation.

“We have been unable to serve our customers in Niger, Kogi and Nasarawa States as well as a significant portion of the entire Federal Capital Territory,” Fadipe said.

“At the moment, only 20 megawatts (MW) have been allocated to AEDC as against the over 400MW that we have been receiving in recent times.”

The grid often records partial or total collapse, which renders most homes in darkness. The grid collapsed in February and May, leading to a blackout across the country. This is worsening the blackout being experienced by households and businesses in parts of Nigeria.

The grid, which is being managed by government-owned Transmission Company of Nigeria, has continued to suffer system collapse over the years. This will be the fourth time this is happening in recent times.

Eko Electricity Distribution Company, in a text message to its customers, said, “Dear customer, the present outage is due to a system collapse on the National Grid. TCN (Transmission Company of Nigeria) assures us that supply will be restored shortly.” 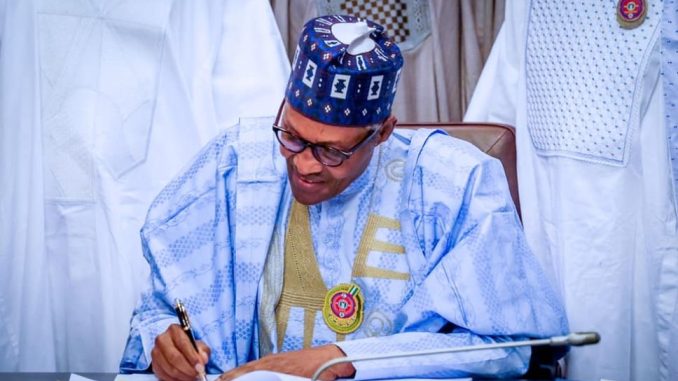 By Abdullahi Mohammed, Abuja
President Muhammadu Buhari Monday in Abuja signed a supplementary budget of N982.7bn for 2021 to address urgent security and COVID-19 needs of the nation.The President signed the Supplementary Appropriation Act, 2021 in his office at the State House in the presence of Vice President Yemi Osinbajo, Secretary to the Government of the Federation, Boss Mustapha, Chief of Staff, Prof. Ibrahim Gambari and Director-General, Budget Office of the Federation, Ben Akabueze and Senior Special Assistant to the President on National Assembly Matters (House), Hon. Umar  el-Yakub.

Of the amount, N123.3 million is for recurrent (non-debt) expenditure while the sum of the N859.3bn is for contribution to the Development Fund for the capital expenditure for the year ending on the 31st day of December, 2021.The President commended the National Assembly for the expeditious consideration and approval of the supplementary budget, assuring that the executive arm of government would ensure the timely delivery of capital projects to achieve the laudable objectives of the Budget.

The project is to be executed in two phases, with the construction and commissioning of a fully integrated 2.5million metric tons of lime per year and a 60 megawatts power plant, while the 2nd phase will be the additional 2.5 million metric tons per year.

The company believes that Nigeria and the surrounding regions have good opportunities in construction, housing and infrastructure development.

For over 40 years, the North-eastern Zone has only one cement company, which makes it difficult to meet the demand of the immediate environment.

The Chief Executive Officer of Madugu Cement Company, Mr. Mohammed Madugu, revealed this during a visit to Governor Muhammadu Inuwa Yahaya in Gombe.

Mr. Madugu said his technical partners had come to seek the Governor’s guidance, advice and blessing in setting up the cement company, which is aimed at bridging the cement deficit in the zone.

“In the absence of a new major investor in the region, I have taken this decision to invest and build new plant in partnership with the Sinoma Company of China,” Mr. Madugu said.

He stated that the project when fully completed and operational, would positively impact on the host communities and the state, such as the dependence of the company local manpower, 90% locally source materials, skills and technology transfer, among others.

Mr Madugu said; “Training, capacity development to locals, building the installations and commissioning improved corporate social responsibility, schools, healthcare centres and potable water and to increase revenue generation to the state are some of the benefits.”

The Project Manager of International Marketing Africa Region of Sinoma International Company, Mr. Sun Yujin, said the company considered it an honour to be invited by Madugu Cement for an investment in Gombe State.

Mr. Yujin said; ”the company would in no doubt provide the needed labour and contribute to the development of Gombe State.”

Governor Muhammad Yahaya said the state would provide a good market for cement, because it had about 25 million people with the need for development, which would require cement, providing a robust commercial activity as the centre of the North East.

He said this was so because of the good trade relations and boundaries it had with the remaining five states in the North East and Cameroon, Chad and the Republic of Niger.

“So, your coming here is very apt and we welcome you most profoundly, because we’ve benefited from the existence of the cement company in this sub-region, but may be with close to three-quarters of the North West. In the whole of the North, I think we have only four cement plants now, that of Obajana, that of Sokoto, then Gboko and that of Ashaka,” Governor Yahaya said.

Governor Yahaya advised the investor to delve into other ventures like power generation, which could easily be sourced in the state.