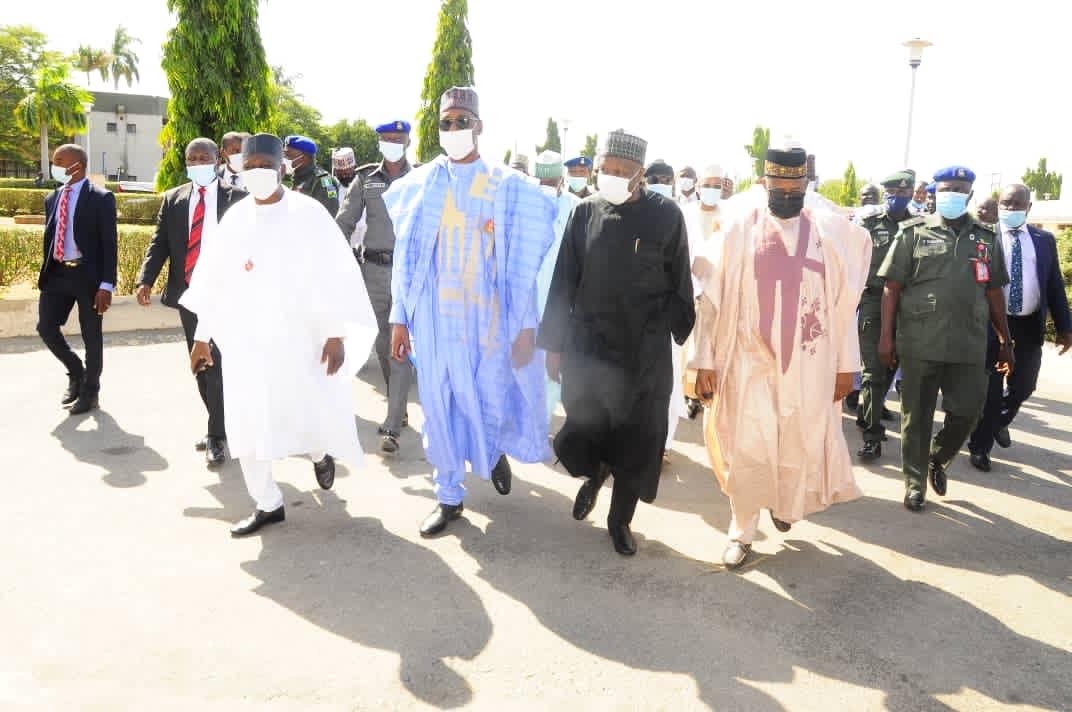 Borno Governor, Professor Babagana Umara Zulum, who is chairman, Northeast Governors forum, today, at the forum’s third meeting ongoing in Jimeta, Yola, said governors in the region need take far reaching measures to ensure incidences of house kidnapping as reported in some states,  does not extend to the northeast.

Zulum made the call in his opening remark before the participants made up of host governor of Adamawa, governors of Bauchi, Gombe and deputy governors of Taraba and Yobe entered closed door meeting.

Zulum raised other issues that can be found below, in the full text of opening remarks
I feel profoundly honoured to welcome Your Excellencies to this meeting of the North East Governors’ Forum, which is third in the series, since the formal inauguration of the Forum in Gombe, in March, this year.  All along, we have been able to identify most of the common challenges we face collectively and as individual States, and indeed we have agreed on how to effectively address such challenges.

2. ​As you you know, the most alarming and worrisome challenge confronting us remains the daunting issue of insecurity, which has been causing excruciating loss of lives and property in the sub region. And the most devastating security challenge is the seemingly unending Boko Haram phenomenon, which has a destructive effect on the socio-economic lives of our people and which has inevitably displaced hundreds of thousands of people from across the North East, but most significantly in Borno State, which is the epicenter of the insurgency. We must however acknowledge the indefatigable efforts of our security forces in containing the insurgency. It is gratifying to note that they have undoubtedly decimated the power bloc and nerve centre of the insurgents in most of the sub-region, with the exception  of  a few belligerent  remnants, who are confined to Sambisa forest   and  northern part of  Borno   State,   especially   around the Lake Chad area.    There is however absolute need for us to seriously look into how to stimulate and renew the confidence and trust of our people in the ability of our security forces to contain the palpable threats, being posed by  the continued presence  of the insurgents. This is to ensure that our people are adequately protected and sufficiently guaranteed to open up and go about their normal socio-economic and business activities, without fear of being attacked or kidnapped or even forcefully being recruited by the insurgents.

3.​As we deliberate on the scourge of terrorism and terror groups within the North East, we need to fashion out ways of facilitating the prosecution of those charged with terrorism activities. At the moment, the process is a bit cumbersome as all suspects charged with terrorism and terrorist related offenses have to be transferred to Abuja for prosecution,  as  only   the Attorney-General of the Federation  has the statutory powers to prosecute terrorists; according to the provisions of anti-terrorism law.  So we need to obtain prosecutorial fiat from the Attorney-General to enable us prosecute those charged with terrorism in our respective States, instead of referringthem to Abuja.

4.​Another frightfully shocking social problem which, unfortunately, is becoming widespread in our sub-region is that of rape. We must find a way of protecting our women and girls from the intolerable and aggressive demeanour of rapists. While it is essential to embark on a massive enlightenment campaign on the dangers associated with rape, there is need also to domesticate the Federal lawagainst rape, in our respective States, based on the peculiarities and special circumstances of each State.

5. ​On the issue of emergent criminal activities like banditry and kidnapping, the twin scourge is assuming a worrisome dimension in the North East, as it is becoming rampant and widespread.   As a result, inter-state road travel is becoming a virtual impossibility for the people, because of the palpable danger of abduction along most of the major roads. It is therefore a matter of strategic imperative for us to give considerable attention to how to deal effectively with the problem and give our people a sense of sufficient and sustainable protection whenever they  travel  out. Unless  we regard it as a matter of urgent  priority,  the  phenomenon   may  escalate, as  it is currently happeningin    some   States,  where there are   persistent   reports  of   innocent   people   being   daringly   kidnapped   even  within the safety of  their homes. This is already happening in States like Kano and Kaduna. I hope the Committee of Attorneys-General, which has been given a special assignment on the issue, would come up with concrete and appropriate legal framework to deal with the phenomenon.

6.​On religious preaching, we, in Borno State, have had a terrible experience when we realised, to our chagrin, that the Boko Haram insurgency and its deadly effects, were the direct consequence of unregulated preaching. Therefore it has become absolutely necessary to curb the excesses of our religious preachers by evolving a formidable legislative framework that could guide not only the contextual standards of the preaching but also its style and form. There is also the need to come up with a profoundly stringent criteria for licensing religious preachers and a heavy penalty for any breach of the preaching code. In this regard, we may be able to nib in the bud, any inclination on the part of the preachers towards inciting their followers and listeners.

7. ​Another issue which unquestionably needs to be urgently tackled is the Almajiri phenomenon and its associated challenges which are increasingly having a telling effect on the overall socio-economic development of the society. Unless the Almajiri system is completely overhauled along the lines of its original objectives, we may end up having to deal with an army of perhaps untrainable youths who inadvertently become vulnerable to the influence of social misfits like kidnappers and bandits and even terror groups like the Boko   Haram    insurgents. It is a problem common to all of us and it needs both multi-dimensional and individually selective approach, based on the general and specific peculiarities of the system in each State. As for us in Borno State, I have already set up a High Powered Committee to forensically and comprehensively look into the system, particularly its attendant issues of begging and unsavoury learning environment and determine  whether   or  not  such characteristics are integral part   of the system or the result of a deliberate or inadvertent negligence on the partof the proprietors. On the short term, the Committee will advise Government on how to improve the learning environment, the academic standard as well as the status of the pupils, while as a long term measure,   the  Committee is to look into the possibility of integrating the Sangaya system into the overall Western education system. These are some of the measures  we  have  taken  so  far on the Almajiri system.    So it is pertinent to table the problem for a thorough and meticulous deliberation with a view to coming up with pragmatic and impactful ways of addressing the issue or even replicating the Borno example by setting up a committee with broad terms of reference, that should cover the entire sub-region.

8. There is also the daunting phenomenon of youth unemployment in the North East which is increasingly becoming a serious cause of concern not only to the sub region but the entire country as well. As we have discovered recently,  the  EndSARS  protest   was  one  of the direct consequences of youth unemployment which unfortunately degenerated  into  youth restiveness, with its  concomitant effects,  particularly  on  governance. We must therefore find ways and means of creating opportunities for our youths to be gainfully employed or actively engaged in useful activities, in order to ensure that they do not constitute a menace or pose a danger to society. Education is key to achieving these objectives and therefore we must work towards ensuring that our education system is resuscitated and reinvigorated to meet up the socio-economic needs and developmental requirements of our society.

9. ​On the economic front, we must renew our commitment to collectively harnessing the vast and diverse resources we are endowed with, in order to build a prosperous and economically sustainable society for both the present and future generations.

10.​Your Excellencies, the challenges we face collectively and individually are enormous but not insurmountable, especially if we approach the challenges in a concerted manner. On this note, I would, once again, welcome your Excellencies to this meeting of the North East Governors’ Forum and wish us fruitful deliberations.