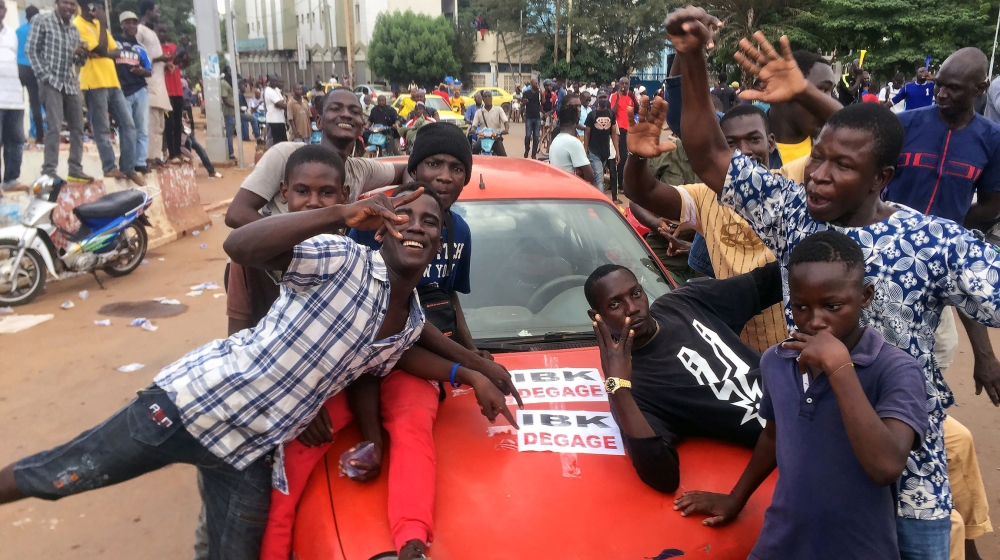 The events began on Tuesday morning with soldiers firing into the air at the base in Kati, a garrison town some 15km (9 miles) from the capital, Bamako, while armoured tanks and military vehicles could be seen on its streets.

The soldiers later moved freely through the streets of Bamako and detained Keita and Cisse. Several senior government ministers and army officers were also reportedly under arrest.

In the capital, energised by reports of the mutiny, hundreds of opposition supporters poured into the square around the Independence Monument, the site of mass anti-Keita protests since June.

“We have come out today to call for the total resignation of President Keita because we heard there were shot fired by the military and we came out to help our soldier to get rid of the president,” a protester said.

“We are tired. The country is paralysed and we do not want this government,” added another..

As Malians waited for the mutinous soldiers to make a statement, the African Union demanded the immediate release of Keita and the other detained government officials.

The Elysee Palace said in a statement that French President Emmanuel Macron had spoken to Keita, along with the leaders of Niger, Ivory Coast and Senegal, and “condemned the attempted mutiny under way”. It did not say when that conversation occurred.

A French military source had earlier in the day told Reuters that discussions were taking place between Mali’s army command and the soldiers.

The developments follow a weeks-long political crisis that has seen opposition protesters taking to the streets to demand the departure of Keita, accusing him of allowing the country’s economy to collapse and mishandling a worsening security situation.

Calls to return to barracks

Before the detentions, the West African bloc ECOWAS had urged the soldiers “to return to their barracks without delay”.

“This mutiny comes at a time when, for several months now, ECOWAS has been taking initiatives and conducting mediation efforts with all the Malian parties,” the bloc said in a statement.

The French foreign ministry supported the appeal, saying in a statement it was closely following the developments in its former colony.

Earlier, the French embassy said: “Because of serious unrest this morning, August 18, in the city of Bamako, it is immediately recommended to remain at home.”

Similarly, the Norwegian embassy in Mali said in an alert to its citizens: “The embassy has been notified of a mutiny in the Armed Forces and troops are on their way to Bamako. Norwegians should exercise caution and preferably stay at home until the situation is clear.”

The US embassy, for its part, issued an alert advising its staff to “shelter-in-place”.

Keita’s opponents have led mass protests for more than two months, demanding his resignation amid growing dissatisfaction over Mali’s economic woes, perceived high-level corruption and the failure to contain a worsening security situation that has rendered vast swathes of the country ungovernable.

At least 14 protesters were killed during three days of clashes with security forces last month, according to the United Nations and human rights activists.

Regional powers are worried that any prolonged unrest from the protests could derail the battle against armed fighters in the wider Sahel region, many of whom are centred in Mali.

A mutiny in 2012 at the same base in Kati led to a military coup that toppled then-President Amadou Toumani Toure and contributed to the fall of northern Mali to fighters.

The next year, a civilian transitional government organised an election that was won by Keita, who got re-elected in 2018.

Underscoring the fear of Mali falling into further disarray over the current political crisis, ECOWAS stepped in last month to mediate and urged Keita to share power in a unity government.